Today was supposed to be different. We were going to go to a nature preserve to do some hiking.

I played Trains of Thought, a few dozen times. My brain got locked in the repetitive challenge on the screen.  After all, the neurologist recommended Lumosity. Helps cognition. Of course, he did not envision me sitting, playing these games non-stop for three hours.

Depression in Alz? Avolition, (a term my therapist uses)?

Behavioral alterations such as avolition, apathy, social withdrawal and emotional disengagement appear to be commonly found in patients suffering from Alzheimer’s disease. A consistent research finding is that negative symptoms in dementia cannot be solely accounted for by depression; they represent a separate symptomatic cluster.

This is from PubMed.

It is what it is. A separate symptomatic cluster.

We ended up going for a hike up the hill, and then D-O-W-N the steep wooden steps to the waterfront. We walked along the straight then curving drive, with cars whizzing by.  We peered into the cave, that punctuates the walk. It was a spot of high amusement with a natural spring , where visitors would gather for a glass of the elixir in the 1830’s.  Later it was the site of an unsolved murder mystery.

Harlequin calms the agitation that plagues me early in the day. My daughter says it’s medicine. My husband says it makes me less OCD.  My email friend, who has the diagnosis too, and who has been experimenting with CBD oil and Purple Kush, asked why I ration it so, if it helps. So I let myself smoke it.

It has inspired me to start drawing again.

A self-portrait in early Alzheimer’s.

Early in my art studies, I was inspired by the great Ed Ruscha. He is very good at finding just the right words and detaching them from their context. They take on a more potent meaning on their own.

This one says it all. Plus my late father was a tool and die maker, so this image has a double meaning for me.

Another self portrait. I dedicate it in homage to Auguste Dieter, the first patient diagnosed with Alzheimer’s. Dr. Alzheimer locked her in an isolation room for a while. When he released her, she would run out screaming, “I will not be cut. I do not cut myself”. She was frightened, obviously.

I am looking for a path, a way to not be so afraid. A way to not be so alone. A way to go on living. A way to be with myself. To find meaning in and solace in the rhythm of life. I’ve lost contact with most people I knew. I have been rejected by many. Friends have closed the door. There is no way back to them. I will walk alone.

I was one person before I got sick, and I am fully another one now. The clothes fit the same. The people I see are the same. But I am different. I have dementia, Alzheimer’s type and there is no going back.

I’m looking for inspiration. A thread to a better day. To adapt to whatever I need to adapt to in order to go on living. I was an artist. A creative thinker. How to become a creative thinker again? I want to make sense, but I don’t. I am meandering. It’s not a straight course. I struggle now to find the words to express what I am going through. There is -Isolation. Depression. Loneliness.

I look to the paintings of Jean Michel Basquiat, the artist who died of a heroine overdose at the age of 27. There is such immediacy in his work. His Skull painting fetched over 110 million dollars at auction after his death. Dead at the infamous age of 27, like Janis Joplin, Jim Morrison and Amy Winehouse. He must have been laughing at death. Or growling at it.

I am still inspired by his paintings. I am just a nobody now, but I can still look at art and get it. He was fierce. 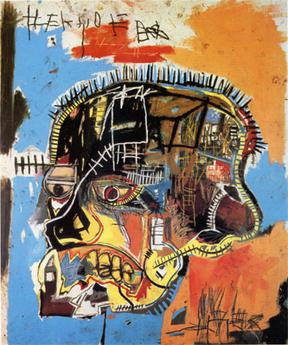 I am now one of 200,000 or so diagnosed under age 65. A notch in the statistic of early onset. I will likely be here tomorrow. I will graciously accept the gift of whatever life I have left.

This is a drawing I made of my daughter two days ago as we sat in the garden. I am grateful she visits me.

Fortunately there are blogs and writing by those with early stage Alzheimer’s. I read these blogs voraciously  and find new ones, and books by people living with the disease.  These trail blazers show me the way, when I get so lost in myself. When hopelessness is all I can see.

I may not make sense as they do. My style of communication, my writing, may be unclear and not offer the resolve and clarity of many who are saner than me. But I am going to try and convey what it is that I am going through, anyway. I will write, draw, and take photos. As long as I can.

We are all going home. My life has changed. I can not do and be who I was. But while I am here, I am still on the journey.