My husband took me to The Alzheimer’s Association support group yesterday. Bless him! My legs felt wobbly walking to the bus but I plowed on. Heaviness and the feeling of a lack of an axis to balance me, is how I can describe it. He steadies me now when we walk together. His arm holding mine, his quick hand  pulling me back as I lean into the street to cross. He is becoming more protective. A comfort to me, though the thing he cannot save me from is happening between my ears. Missing my independence and accepting his support, which he gives more freely now.

This was the third time I met with the group. We are each as different as snowflakes, as all  people are. Everyone is different from each other whether they have dementia or are “normal”. Who are these people that are suddenly in my life? How did they get here? How do we support each other? Like spectators of each others oddities, we shared and went around in a circle talking about what we still can do. Most are in their 80’s or late 70’s. Only one is close to my age, and practices acceptance with the tenets of the 12 step step program he learned as a former member of Alcoholics Anonymous, and still retains. I look to him with admiration for offering that. The Serenity Prayer (Reinhold Niebuhr)

I am the youngest in the group. I know in younger folks the disease moves faster. None of them is experiencing the changes I have been. They each have their own “peckle” (package). I share my stories about what I’m experiencing, careful not to dominate, eliciting the stories of the others.

Political correctness in the world of Alzheimer’s and dementia is that acceptance of having and living with this is what’s most important. What’s the point of complaining? But I see the other person’s snapshot perception of me is not the movie I’m living. For me there is physical decline as well as cognitive decline and it’s not been the slow decline of aging. I fell off of a proverbial cliff. Accept this? Relax into it? Ha! Yet it’s mandated in life that to carry on is what we must do. No matter what, as long as we can.

After last week’s Alzheimer’s Association support meeting – I felt like I nailed it, and felt optimistic. A good meeting. A good feeling. I gave myself a pat on the back. Not too much anxiety traveling there, complete orientation to time and place. Able to walk 3 miles. Then wham! My husband and I had walked across town to the Port Authority. We went up the escalator to the second floor where the gate for our bus is located. I reached into my purse to take out the tickets from my wallet. I was holding the tickets in my right hand, and the wallet in my left. Suddenly there was what looked like a blue string or blue line connecting my wallet and the tickets. Then it disappeared. I looked down at the tiles on the ground, and saw there were lines between tiles. Apparently a line from the tiles had jumped up and become a virtual blue string that appeared and then disappeared. The only other time something like this happened was over a year ago. I was laying in bed, and looked to my left, and there was a sheath of pink red light, a ceiling to floor curtain of colored light. I reached out to touch it and it disappeared. I’ve been told that people with neurodegenerative diseases hallucinate, and sometimes see people and animals, creatures that aren’t really there. Would I prefer that to sudden visuospatial depth of field distortions? Dancing bunnies in the middle of my living room. Talking zebras? A singing pink elephant on my ceiling perhaps?  I had better watch out what I wish for (no snakes please).

My friend Dallas is a devout Christian who is really funny. He talks to G-d (don’t we all ?) and in his last blog post, a letter to G-d, he says he thinks death is underrated. I think that’s a funny thing to say. He’s joyful, prayerful, thankful, no matter what, and waiting on G-d. Not the least bit antagonized by it. I love that about this man. Wish he were a rabbi!

Speaking of rabbis. I had a visitor who is transitioning from her role as a chaplain to becoming the rabbi of a congregation in the neighboring city next to mine. She visited me twice before over the past year. I hadn’t heard from her and accepted that she was gone from my life. Then she called me out of the blue to make an appointment with me. The reason for her visit? I found out it was to tell me that she would never visit me again. Why? Because she was transitioning from the role of chaplain to being a rabbi. At the time I was really hurt. Why make an appointment with me to tell me that she would never visit me again? Couldn’t she have broken up with me over the phone? (Obviously I am not dying fast enough and this woman is busy).

When I first met her, I asked her to read my blog. She gave me her email address and I sent it to her. The next time I saw her, I asked her if she had read it. She said she receives so many emails, she could not possibly open mine and read my blog. I guess people with who have Alzheimer’s are not supposed to ask for a rabbi/chaplain who visits them to read their blog. But my dear friend who is the chief rabbi to Poland reads my blog, so I figured she would too. Then she told me that she would never see me again. I thought of my friend Lon, who told me some people are acting out the role of their job – rabbi, priest, chaplain, and a rare few do it because it is their calling. My friend in Poland, the rabbi, tells me he learns from me. This woman, a rabbi and a chaplain is too busy to learn from me. Not too busy to visit and hurt my feelings though. Odd how people’s roles and jobs do not fit who they really are. I am learning. What’s important now? My daughter looked at me crazily when I snapped the photo. Her eyes were as wide as marbles. My daughter was 23 when this began. She had just begun to launch herself. She started a career. Moved in with her boyfriend. Spread her wings. She does not want to be a caregiver for her mama who has Alzheimer’s. I see-sawed between being needy and being overly concerned about her and how she could weather the loss of me as I change. She is going to be okay.

I hope. I worry about her, as a mother does. Is she taking care of herself, now that I can’t be the mom who takes care of her? This disease is a curse that has robbed our happiness as a mom and daughter. When she is with me now, our roles are reversed, and she acts like the mom. She prepares the food, calms me down, does the research, brings CBD oil. I love her and hate this disease. My son is now 36 years old. A lawyer married to a lawyer, and father of a toddler, owner of a house, that is a castle. Member of a family that has extended family that helps them raise their daughter. He is fully launched, unlike my daughter who was far too young to have this happen to her mom and her family. I see his sadness, and the loss and dismay  he has experienced in seeing symptoms of this illness in me, and what it’s done to our family. My granddaughter. The next generation. The Alzheimer’s began when she was in her mother’s womb. Now she is two and half, a bubbly effervescent bundle who is smart and strong. Blessed with a family that dotes on her, she beams with confidence. I used to envision myself introducing her to art museums, and fashion and culture. I so wanted to be that grandma. She will be untouched by this.

My husband, my soul mate, my caregiver. My back up brain. Weary. Lonely, very sad and tired. Me, his wife of forty one years, and mother of his children, a woman that was his equal partner. Now I am in need of his help and support for the simplest things. He works full time and is far too young to have this happen to him and to us. It has been robbing him too of all the dreams we had for a happy future, a time that we were going to continue to enjoy together. Our partnership. A normal life. 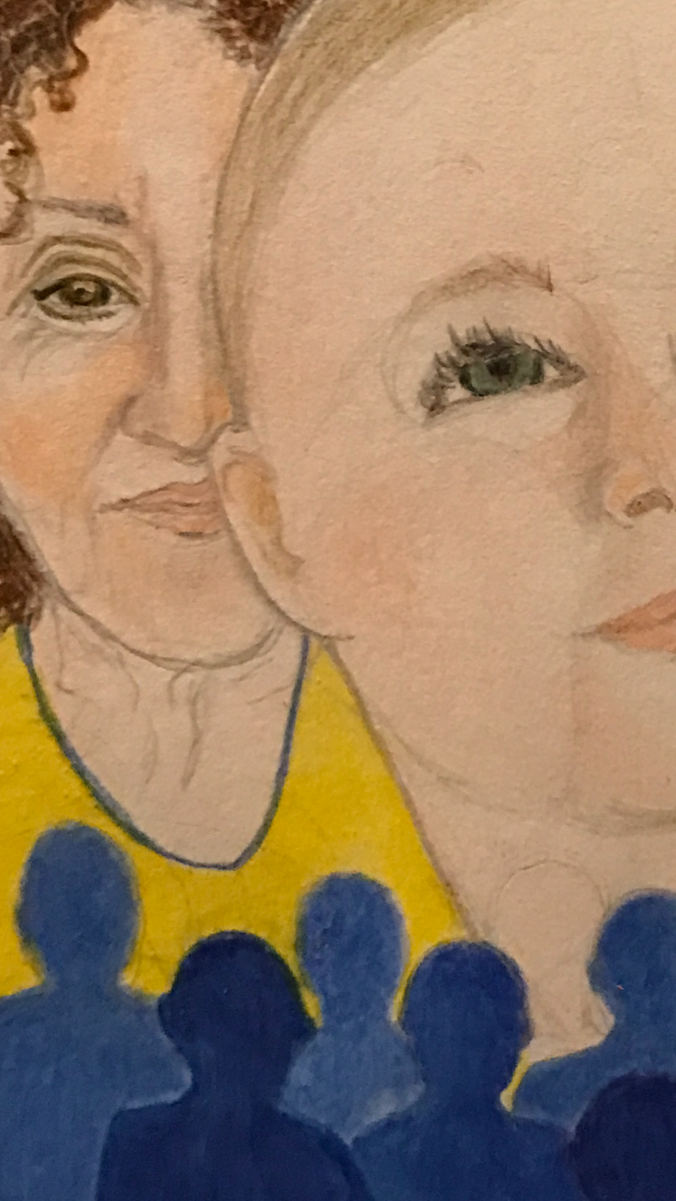 Who are those people looking at my family that are depicted in my drawing? They’re in shadow witnessing the story unfold. Souls, I think. The watchers, spirit guides perhaps. Witnesses. I am fading from view. Eclipsed. My family members are drawn as large heads aggregated into a kind of land form, a kind of mountain. The figures watch. There are the watchers and the experiencers. I think we do this in our lives and it is our journey that we watch. There is a part of us that does not feel the pain. A part that is more evolved than the drama. An inner being that transcends. Witnesses.

To maintain a positive attitude is hard for me, but I try. How? I try every day to maintain some kid of a routine. Get up, get dressed, play cognitive games, watch how the scores have declined and then brain train until they improve. Force my brain and body to work. Look for the ways to find peace in myself. Humor, friendship and connection. Appreciating the love that is still there. Giving myself the liberty to use this forum to express myself. Telling people I love, that I love them. Today a call from an old friend. He indulged me with listening to my story, going on about the changes and challenges. He’s been going through his own illness, but listened. I am grateful for his call.

There are things I notice now that I never saw before. Noticing things that I didn’t take the time to notice before. My husband and I walked east on 41st Street and then sat for a moment on chairs in the park, and looked around. I asked him about a building with an indented triangle in it’s corner. He always looked around and has noted the things he saw, that I now see, but I didn’t notice before. He thinks the building’s architect is a Japanese designer. We stopped to look at the daffodils blooming in Bryant park and proceeded up 42nd Street in the direction of the Chrysler building.