I wrote this yesterday, Wednesday, March 7, 2018. That much I know. But I can’t seem to think in a linear manner anymore, at least not very well. The damage to my brain continues, and I write out of order, think out of order, the steps of doing things are often out of order, like getting dressed and what article of clothing to put on first.

I start writing about an idea and then lose that thought, and then I forget what I was going to say, and begin again looking for a new way to start. I really can’t think straight. The psychiatrist Dr. R., wanted to put me the antipsychotic Risperdol, and when I didn’t want to take that, he tried to get me to take Lamictal, then Depakote. I don’t want to be medicated, and I believe psychiatric medication disrupted my synapses in the first place, and has a lot to do with my spiraling into younger onset Alz, rather than later in my life. His reasoning was that I don’t think straight. He was right, but it isn’t because I am Bipolar, and those medications are supposed to help Bipolar people have more stable moods. He said my thinking is crooked. He was right. He said that I have flight of ideas and loosening of association. I picture ideas with birds wings, and loose change in a pocket. I am literal. I am looking for the concrete understanding, a picture of what this means.

My non linear thinking can’t be corrected. I can be medicated to not be ruffled by it as much. So that it causes less anxiety, I suppose. I can be sedated, I suspect. But there is no going back to who I was.

There is a test that the neuropsychologists administer to assess how one’s brain follows a pattern and connects things, called Trail Making A and B, that is used in assessing dementia. It measures how quickly the person can plan steps and follow a sequence. Twenty four circles are randomly placed on a page, with numbers and letters. The idea is to connect the number to the letter, until the sequence is completed – Number 1 to the letter A, then number 2 to the letter B, then number 3 to the letter C, and so forth.  The results of that test showed I have considerable difficulty with processing and speed- how quickly I think. How quickly I connect the dots. This leads to executive dysfunction which leads to significant limitations in the daily routines, such as impact on functionality, i.e., in the performance of activities of daily living, which obviously reduces autonomy and quality of life.

For me, for example this results in not knowing what to do first, second, third. I end up with sometimes only washing a few dishes if the sink is full, taking out a container of juice to pour some for myself – but there is no cup there to pour it into, trying to scramble some eggs in a pan and seeing that the spatula or plate is missing, trying to complete a typed sentence and going back and reading it and seeing that letters are missing in words. Or parts of the word get left out, and that is very frustrating, or letters are switched and out of order.

In the brain signals that form memories and thoughts move through an individual nerve cell as a tiny electrical charge. Nerve cells connect to one another at synapses. When a charge reaches a synapse, it may trigger release of tiny bursts of chemicals called neurotransmitters. The neurotransmitters travel across the synapse, carrying signals to other cells. Scientists have identified dozens of neurotransmitters.

Alzheimer’s disease disrupts both the way electrical charges travel within cells and the activity of neurotransmitters.

So my thoughts are disrupted. I see that they are incomplete. The science explains why.

Living with this is what causes frustration and anxiety. Simple actions require longer to complete. I see that things with wires, like the earbuds I use to listen to music or a Zoom chat privately on my laptop, get tangled, and untangling these takes concentration and patience and fine motor dexterity.

Completing a drawing, photographing it, sending it to my email, uploading it to my desktop, uploading the image into the post- these are steps that require remembering and implementing a sequence. Every time I am able to do it is a triumph of independence for me. It’s the small things like this that matter to me now.

The Silly Drawing: I call it Mutations A-Go-Go, and used that as the title for this post. The characters are supposed to represent people with dementia I have befriended in the dementia cafes online. I was also thinking about inherited mutations in DNA as the cause of Alzheimer’s and other forms of dementia like FTD (Fronto Temperol degeneration where 40% of cases are caused by inherited gene mutations), and sporadic onset, where it’s unclear what in addition to environmental factors combine to cause it. I was trying to illustrate the fragmentation I feel and experience (not too successfully, but I kind of liked the feeling of playful lunacy in it ). The A-Go-Go suffix takes the torment out of the word mutations. I’m playing with things now, words and images. Trying to be less uptight. I can play with words and combine them in the way a Surrealist like the French surrealist André Breton did. He discovered the singular phrase that became foundational to the surrealist doctrine of objective chance: “as beautiful as the chance encounter of a sewing machine and an umbrella on an operating table.”

This metaphor captures one of the most important principles of Surrealist aesthetic: the enforced juxtaposition of two completely alien realities that challenges an observer’s preconditioned perception of reality. I’m an Alzheimer’s Surrealist.

Chance: I’m now more curious about what comes out on the page without a clear plan. I read that caregivers for their Alzheimer’s loved ones like to provide activities and buy coloring books for them. Since I was, and still am a creative person, and don’t yet accept the personification of being a child in a late middle age body, I am not interested in someone else’s lines given to me to color in in a coloring book to keep me occupied. In a sense this drawing is a page from my own coloring book. When I made this drawing, I saw that I was approaching the page without any ideas. I was distressed about that, initially. But I stuck with it, remembering that an artist’s studio practice (when one is normal working artist) is to go into the studio and have the attitude that something will be created and it will lead to something.

Can I curse here? My sleep is fucked!

Last night I was up until 5 am. Why? It’s daunting to not be tired enough to start getting to bed, but the process of going to sleep, requires first that I write the list for what I want to accomplish and any appointment reminders. If I don’t do the list then I will forget what I want to do, and what to do. That’s how impaired my memory is. Not that I get everything done on the list, but I do get some of it done. Writing it, however, and going through the bedtime routine is actually very very hard. Getting myself to bed is work! I found myself laying on the couch with my shoes on. I felt like I wasn’t able to move. My brain was too alert to sleep, so turned on the TV.

I ended up watching two documentaries about people who had younger onset Alzheimer’s who both died after around 8 years which is the average with optimum care.

One of these films was The Genius of Marian https://geniusofmarian.com/  I’ve watched it before, but this time I saw new things and experienced it anew. It’s an intimate, poetic documentary made by White’s son, Banker White, a filmmaker, about Pam White and her family as they all struggle to deal with Pam’s Alzheimer’s disease. As the film opens, Pam is in the midst of writing a book, The Genius of Marian, as a tribute to her mother, painter Marian Williams Steele, who died of later onset Alzheimer’s. But then she herself is diagnosed with the illness and the book will never be finished. We see Pam progress. By the end of the film she has come to terms with her condition (something that I think I am in the process of doing, as I am coming to treasure the love of my family and the friends who are still a part of my life, and the very full life I have led). White remarks, in a stunning moment of lucidity — not unusual in people who have Alzheimer’s — “It doesn’t change anything.”

Co-produced by Banker’s wife, Anna Fitch, she says about the film, “This is a reminder that we don’t often talk about the really important things until we’re in the middle of a tragedy, but you don’t have to wait. Alzheimer’s gives you the unique gift of time with someone you know you are going to lose. I hope our film will inspire people to connect on an intimate level with everyone they love”.

I watched this on Amazon Prime for free. I hope you will find a way to watch it.

The other film was the story of Diane Friel McGowen,  Forget Me Never.

Above is the whole film on Youtube, if you can stream it. It is worth watching to learn about McGowen’s story as the first younger onset woman who formed support groups for people in the early stages.

McGowan  wrote Living In The Labyrinth: Personal Journey Through the Maze of Alzheimer’s, the story of how she found the strength and the courage to cope with this devastating disease that has over afflicted five million Americans. She was only forty-five when she first began to struggle with the memory lapses and disorientation that signal the onset.

“Somewhere there is that ever-present reminder list of what I am supposed to do today. But I cannot find it. I attempt to do the laundry and find myself outside, in my backyard, holding soiled clothes. How did I get here? How do I get back?”

“The Alzheimer’s patient asks nothing more than a hand to hold, a heart to care, and a mind to think for them when they cannot; someone to protect them as they travel through the dangerous twists and turns of the labyrinth.”

It’s been a brutal day outside, and I’ve been warm and cozy inside with my husband all day. A Nor’easter hit this area, and it’s winding down now. The snow is blanketing the street. 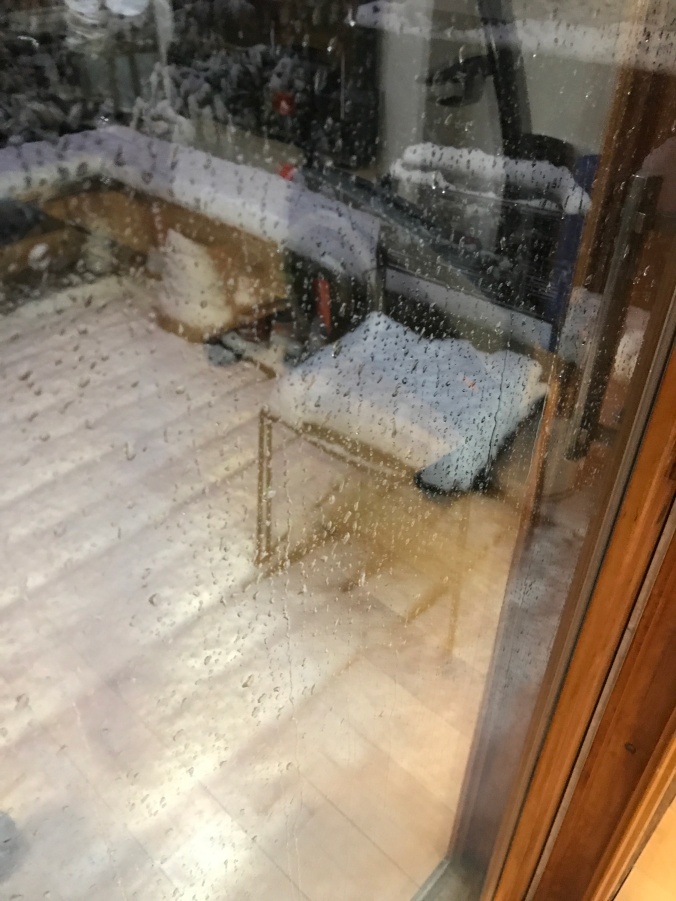 Grateful for the terrible weather. For having another day together. For electricity and heat. No hair on fire. No insanity. A peaceful day.