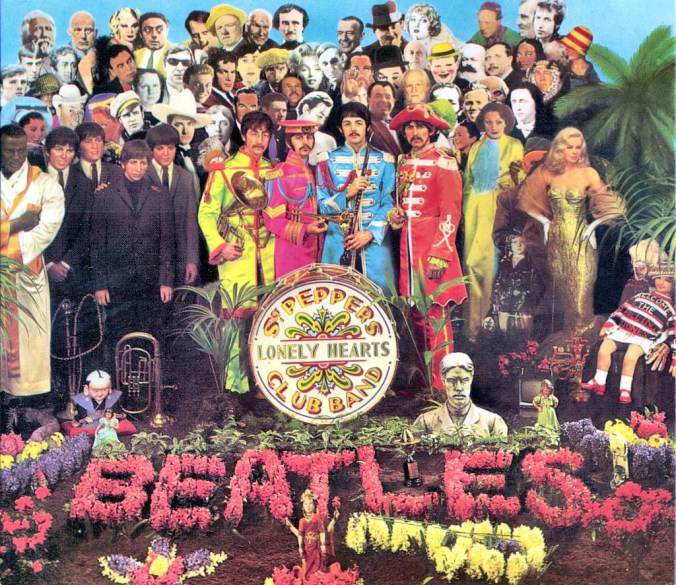 I was born a little too late to be mesmerized by Elvis, the hip swinging King of Rock and Roll, who my older sister and her friends swooned over. I knew he made rock ‘n’ roll the international language of pop. I took note of the boys my sister hung out with on our corner, who combed their hair like him, and wore clothes that emulated his coolness, as they gyrated to his music on transister radios. But I didn’t “get” him. “I Aint Nothin’ but a Hound Dog” meant nothin’ to me.

You ain’t nothing but a hound dog
Been snoopin’ round my door
You can wag your tail
But I ain’t gonna feed you no more.

I screamed just like thousands of girls did when the four mop heads, known as The Beatles sang, I Wanna Hold Your Hand on The Ed Sullivan Show on February 9, 1964 (fifty-four years ago).

When John Lennon sang Girl on the Beatles 1965 album Rubber Soul, I was old enough to listen to the lyrics and be stirred by their meaning, and though sad melancholic love songs are just that, there is something in the lines in the last verse of that song, that I recognized as poetry.

Was she told when she was young
That pain would lead to pleasure?
Did she understand it when they said
That a man must break his back
To earn his day of leisure?
Will she still believe it when he’s dead?
Ah, girl, girl, girl
Ah, girl, girl

In the 50’s and early 60’s, there were television shows I watched as a kid, like Father Knows Best, in which we saw an American middle class family with mom, dad and their growing children in small city USA, http://www.imdb.com/title/tt0046600/mediaviewer/rm3014130432 These folks presented the stable family unit, and were exemplified by Jim Anderson, his wife Margaret and their three children, Betty, Bud and Kathy. My father didn’t always know best and my dad was no Jim Anderson. My mother was as far from Margaret Anderson as could be, with her broken English, and shopping cart. Though they tried to fast forward themselves into American culture, my parents were greenhorns, Jews who had been displaced, orphaned in the Shoah, and their identity was shaped by their history. My mom was always well dressed though. Best dressed. A tiny woman, she would shop at Alexanders, the local department store, and buy clothing that she would re-tailor to fit perfectly. As much as they dressed like the parents of my schoolmates, they were different.

That first time I saw the Beatles on the television in our living room, where the family would gather at 7pm on Sundays, I felt the stirring of what it meant to be a young American girl on the cusp of sexuality and identity. Wow. It was such a liberating feeling.

The Beatles broke up when it was no longer fun for them. How psychologically healthy.

Time shows us that the swinging pendulum who gave us John Lennon and Imagine, Give Peace a Chance, spawned a lunatic John Hinkley, who shot him dead outside of the Dakota, a building I would pass on trips to the upper west side of Manhattan. I remember images of Yoko Ono and John Lennon hosting their marriage from the their bed, saying if only the people who made war, would stay in bed instead, there would be peace in the world. 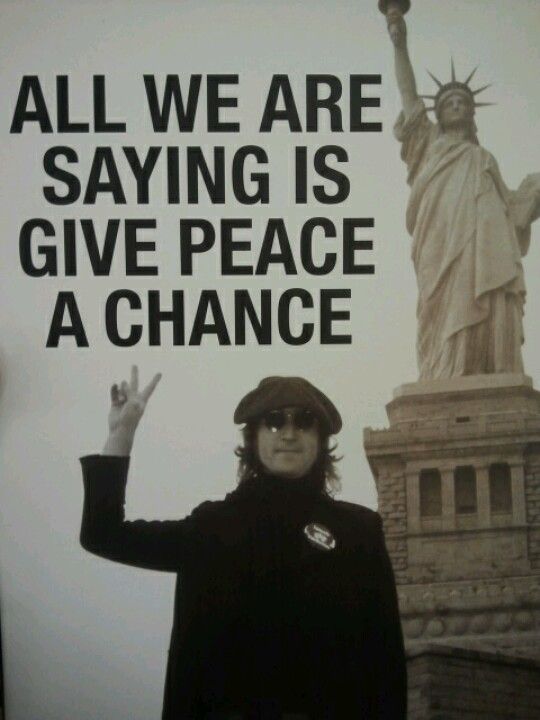 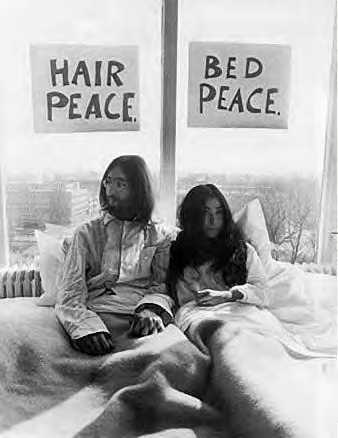 George Harrison wrote All Things Must Pass, and died at the age of 58 from lung cancer. He was a deeply spiritual man who often said, `Everything else can wait but the search for God cannot wait,’ and `love one another’. Ringo Starr (Sir Richard Starkey) is now 77 years old and still touring with his All Starr band. Paul McCartney (Sir James Paul McCartney) is happily remarried at 75 and still touring and making music. My favorite quote from him- And in the end, the love you take is equal to the love you make.

All Things Must Pass
George Harrison
Sunrise doesn’t last all morning
A cloudburst doesn’t last all day
Seems my love is up
And has left you with no warning
But it’s not always going
To be this grey
All things must pass
All things must pass away
Sunset doesn’t last all evening
A mind can blow those clouds away
After all this my love is up
And must be leaving
But it’s not always going
To be this grey
All things must pass
All things must pass away
All things must pass
None of life’s strings can last
So I must be on my way
And face another day
Now the darkness only stays at night time
In the morning it will fade away
Daylight is good
At arriving at the right time
But it’s not always going
To be this grey
All things must pass
All things must pass away
All things must pass
All things must pass away
____________________________________________________________________________________________
The joyful moments pass too quickly. Today my husband held me in his arms and we danced a little bit to an old Eric Clapton song, In Heaven https://www.youtube.com/watch?v=ueXtbIQ3shY.
Music soothes the soul. It’s the one art form that exists through time, in time. Sound traveling through time.
The present. I can still remember what I had for breakfast. Berries, yogurt and a protein shake. My husband makes these for me every day. Then I had a vegetable omelet and toast with fruit jam. I am aware of the daily confusion getting dressed, and getting through the day. I talk to myself when I’m alone, narrating the steps of what I’m doing. Crazy, but it helps me manage.
Before this disease took hold, I thought I had the luxury of time and that my husband and I would have time to make plans, travel, enjoy our children and grandchildren. That was less than 3 years ago. Now time is folding in on itself, like the prions mis-folding in my brain. Relationships that I treasured are gone! Poof.
My husband pays for part time home health aides, who come to help me get through the day, offer companionship, help me to travel, make sure I walk, inspire me to push very hard to be dressed before they get here. Inspire? Inspiration used to be something that would fill me with joy. Ideas, creative ideas, looking forward…always looking forward. Now fortitude is needed to get out of bed and get dressed and walk up the street. Fortitude replaced inspiration.
Fear of the future: My husband calls himself an upstanding guy. He certainly is that. Caregiving is absurdly hard and he does it methodically. He makes sure to prepare nutritious meals, buys me books, and pretty much everything I need, and today he danced with me. He even held me in bed, something he hasn’t done in many many months. Wow. We must be softening. I know when he is stressed after working and driving and is exhausted he has no patience for me. Today he was sweet.
He has told me he would never place me in a home. I have read about these broken promises on the caregiver’s forums. But I am hoping that never happens to me. I am hoping I will be gone before that even crosses his mind as a serious consideration. Before my care is too overwhelming. Please. Bury me in the backyard next to the hyacinths I planted 4 years ago (would that be legal?). The great writer and thinker, Sir Terry Pratchett who had Alzheimer’s and died at age 66, was buried on his own property, I believe. Speaking of Terry Pratchett, here are some wonderful quotes from him https://www.buzzfeed.com/kayetoal/23-of-the-most-beautiful-terry-pratchett-quotes-to-remember?utm_term=.lr4WobK47#.xwRDjYWro).
Yet, I read Thomas DeBaggio who five years after he published his books about living with this disease, was a babbling incontinent Alzheimer’s patient in a nursing home who could not use his arms or legs. His wife loved him and took care of him for the first ten years but it became overwhelming.
This is the reason people do not want to be around someone who has the disease. Fear. Fear that the person they are speaking to will be someone who becomes something heinous, or impossible to recognize or care for – unknowable. an overwhelming burden. I’ve watched the videos of people with Alzheimer’s shredding paper, killing imaginary snakes. Lord help me to not go like that. Give me peace. A woman I know told me her mother had Alzheimer’s and died at the kitchen table. Just like that. Her head plopped down on the kitchen table and she was gone. I like that. Here and gone. I want to be surrounded by my loved ones, my husband and kids, telling me it’s okay to go, and just closing my eyes and gone.
Enough you say. This is too morbid. Sorry. We all die I will remind you. I just don’t want this to be insanely weird and horribly drawn out. It’s weird enough already.

I don’t want to forget the Beatles.

9 thoughts on “Child of the Sixties: Fragments, Fears, Memories”