My daughter enrolled us in Mindful Connections at The Rubin Museum, a program for people with dementia. Trained museum guides facilitate a gallery experience designed to promote conversation and engagement with works of art and each other.

Above is a photo I took in the gallery of a gilt copper alloy sculpture of Buddha Shakyamuni, from the 14th century.  The sculpture of the historical Buddha shows him with characteristic lotus wheel marks on his hands and feet, wearing monastic dress, and performing the gesture of touching the earth, a reference to his enlightenment.

I knew to expect a range of much older people in the group, and different levels of progression of dementia, as I’d seen at the support group. I understand better now that dementia is generally seen in much older people than me, and that the spectrum is broad. There was a striking older couple fully mobile and alert, several old men with their health aides, a well groomed woman age 70, in a wheelchair with her aide, a seriously infirm and very old woman of color with a caretaker. I think this was her daughter. The woman’s gray hair was braided so neatly and she was well cared for. It looked like she was doted on with love. Her eyes had the look of not being there, but she was alert enough to hold herself up partway in her wheelchair. She was present as much as she could be. I observed a certain dignity in her presence.

It turned out to be the best day I have had in a very long time.

We met in the cafe, where tea time is arranged for the visitors. The amiable guides introduced themselves, and separated us into two groups and brought us up in the elevator to the floor where masterworks of Himalayan art were on display. We looked at Buddhist sculptures and paintings from the 14th to 18th centuries, and our docents spoke about each work and asked us questions. One man (repeatedly) said he had been to the Stupa of the Tooth, during WWll. This is a sacred temple in Sri Lanka which houses a tooth of the Buddha.

As we walked around the gallery, I spoke with Jeremy, our docent, and told him about my diagnosis. I told him I had taught art history, but had never been an expert on Eastern art, and was so was glad to be learning from him. He told me about how much he loved Buddhist art and how he was a practicing Buddhist. He talked about his own meditation practice, and how  the museum has a Wednesday evening meditation class. He encouraged me to attend. I wondered to myself, how in the world I would get there on a Wednesday night, when I haven’t been able to travel alone even in the day, for some time. Yearning to be normal again strikes at unguarded moments like this.

Here is a photo of a Nepalese sculpture of the Vajrasativa, a personification of the vajra, a symbol of the enlightened mind. The gilt copper figure sways gracefully at the waist, combining feelings of movement and stability.

Movement and stability:  I’ve been looking for a way to live with Alzheimer’s. It is extraordinary hard. There is no roadmap to live with the limitations of a changing brain.

I do not seem upon first meeting to be a woman with Alzheimer’s pathology. Dressed neatly, walking and talking, still in command of a reasonable vocabulary, and ability to interact, it doesn’t seem like I have this disease to others. I do not fit in easily with any group. Little did the docent know, how I struggle, it’s not apparent to anyone who sees me on the street or in a place like this. But my daughter, who accompanied me to this museum, knows only too well.  I no longer can take care of all my own needs. My baseline has changed, and I am desperately hanging on to a self I can recognize.  People with Alzheimer’s dementia in the early stages have to fight the disease, and not give up. I have nearly given up many times. I am hanging on by chronicling my journey for as long as I can.

I loved art and films and the world of the creative spirit. I created films and spoke confidently in front of audiences. I used to travel to the city every week, seeing art and film and immersing myself in contemporary culture. I was a culture vulture. Now going anywhere in New York requires help. Support. I become disoriented in the street. Crowds irk me and cause so much anxiety. The city streets, with cars honking and the noise and bustle unnerves me. 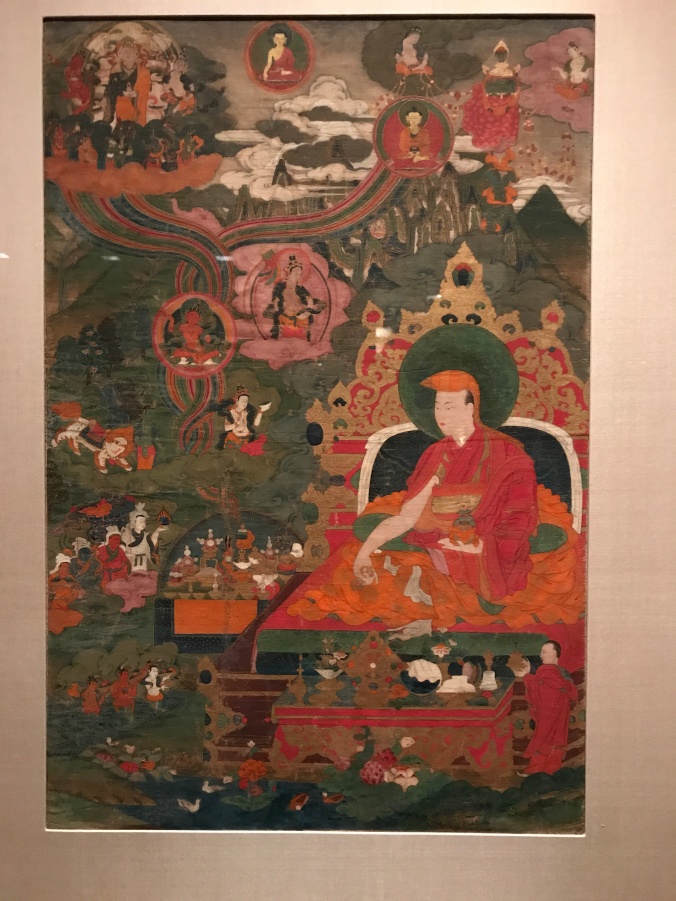 Here is a painting of Lama Performing a Long-Life Ritual. A dramatically twisting rainbow light winds up from the offering table, where he presides with his large body over the scene. Wealthy people would commission these paintings and pay for the merit of having the painting made for them. 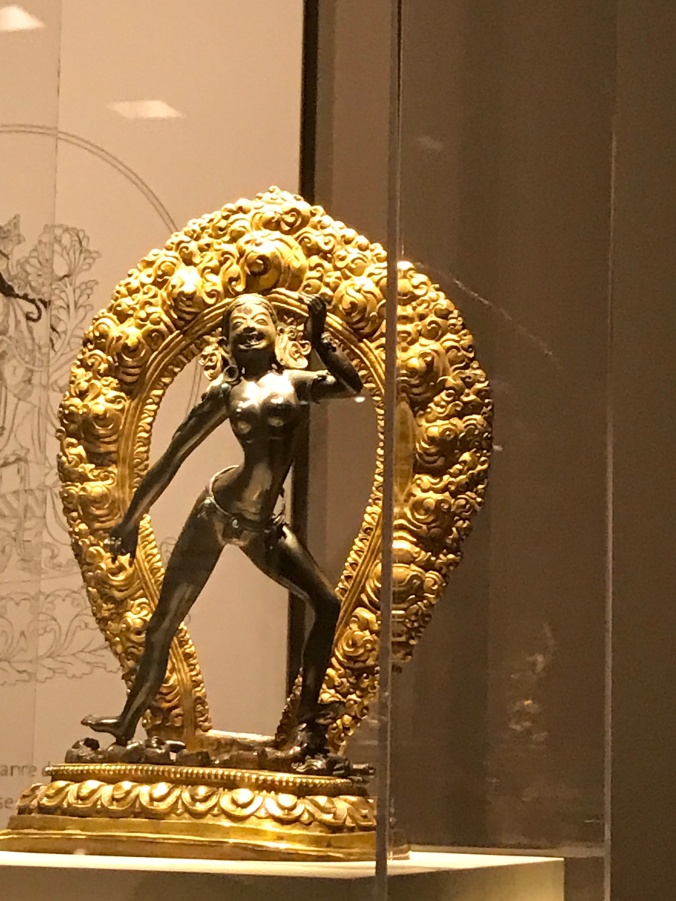 Vajrayogini, a brass and gilt figure of power, steps on human heads, as she dances nimbly through space. She is a Tantric Buddhist female Buddha. Her essence is “great passion” (maharaga), a transcendent passion that is free of selfishness and illusion, and intensely works for the well-being of others and for the destruction of ego clinging. She is seen as being ideally suited for people with strong passions because she provides the way to transform them into enlightened virtues. She is the feminine manifestation of divine wisdom, naked to the world. No shame. Her mantra is an open secret that requires instruction by a Buddhist teacher.

After the program which focused on these examples Buddhist art of the Himalayas, I looked around for the other participants, but they had all disappeared. Except for the old woman with the neatly woven gray braids.  Sitting in the cafe, over lunch, I saw her with her caregiver, who was feeding her with a spoon.

My daughter and I ventured upstairs, and found the exhibit of the photographs of Henri Cartier – Bresson: India in Full frame, curated by Beth Citron. The photographs capture a decisive moment when photojournalists and magazines still had the power to define how we see and understand other cultures and globally-significant events.

Here are several that resonate. 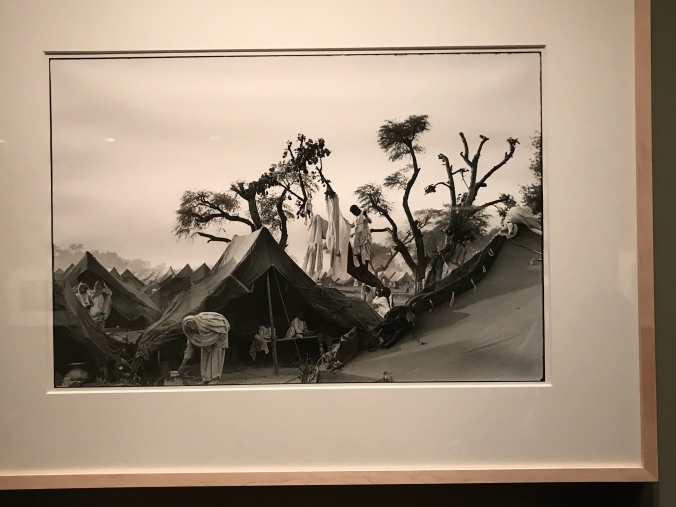 Drying laundry on a tree. 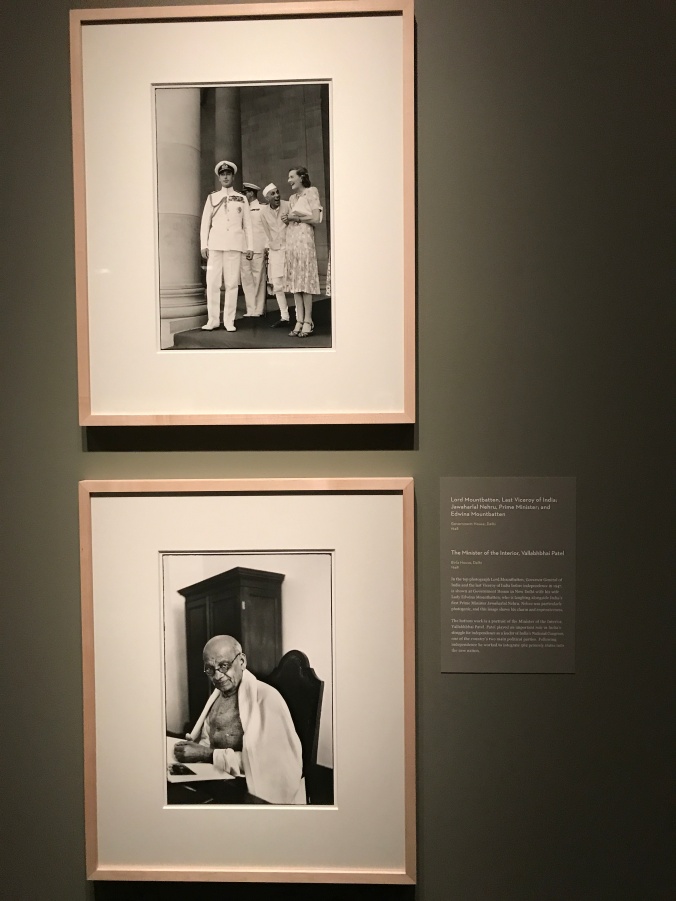 Top: Lord Mountbatten and his wife, Edwina Cynthia Annette Mountbatten, Countess Mountbatten of Burma, joking around with Jawaharlal Nehru, the first prime minister of India, who later emerged as the paramount leader of the Indian independence movement under the tutelage of Mahatma Gandhi.

Bottom: Vallabhbhai Patel the Minister of the interior and later deputy prime minister who led country’s struggle for independence and guided its integration into a united, independent nation.

Crowds gathered for Mohandas Gandhi’s funeral. Affectionately known as Mahatma, he led India’s independence movement in the 1930s and 40s by speaking softly without carrying much of a big stick, facing down the British colonialists with stirring speeches and non-violent protest.

And finally, Cartier-Bresson was allowed him to photograph Gandhi alive and dead. Here is Gandhi’s funeral pyre after his assassination.

Made me think of the children’s nursery rhyme, Ring around a rosy, a pocketful of posey, ashes, ashes, we all fall down.

We left the museum, and walked around the block.